I love finding direct references to art in the world. It happens quite often, but the latest print and video ad from Dior struck me as a wonderful example of how art influences pop culture and can remain relevant long after the paint has been applied to the canvas.

Manet’s iconic Le déjeuner sur l’herbe (Luncheon on the Grass) depicts three figures casually lunching while a woman in the background bathes. Of the three figures in the foreground, two are fully clothed men engaged in a conversation, and the other is a nude woman engaging directly with the viewer. Emile Zola writes about the public reaction to the painting at the time:

“This nude woman has scandalized the public, who see only her in the canvas. My God! What indecency: a woman without the slightest covering between two clothed men! That has never been seen. And this belief is a gross error, for in the Louvre there are more than fifty paintings in which are found mixes of persons clothed and nude. But no one goes to the Louvre to be scandalized.”

What Zola refers to are allegorical paintings in which commonly nude women lounge amongst clothed men, but those paintings often reference Greek or Roman myth so the women were not meant to represent ‘real’ women, rather an allegory. The nude figures in the historical paintings do not engage with the viewer either so they are there to be consumed at a comfortable distance by the viewer.

The woman in Manet’s painting stares directly at the viewer acknowledging his presence with a smile. Her awareness shifts her from nude to naked, and the casual title of the painting makes it clear that this is no allegory but modern day.

The Dior print ad replaces the men with two other women, and the figure engaging the viewer is not nude. She does stand out from the others as a blonde wearing a bold, red dress compared to the classic black the other two brunettes wear. I also find it interesting that the two women engaged in discussion are veiled with pastel colored gauze over their eyes. In the video version, the protagonist is the only one not veiled throughout, which leads one to believe she either stumbled into this illicit scene or orchestrated it. It feels more the former, as if she is experiencing a fall from innocence into some wild pleasure garden (a little Alice in Wonderland), but maybe I’m taking it too far.

At the last meeting I had with my mentor, we discussed the appropriate way to crop the body in an image. One of the best things my mentor has taught me over the past 8 months is to be more aware and purposeful in my image making. I don’t have much classical training, so I will often ‘wing it’ when it comes to composition and scale. Intuition is extremely important in art, but so is planning. My paintings often feature a figure that is cropped in some way. It’s rare that a full figure makes it onto my canvas, and, before this meeting, I hadn’t really thought about why. It just sort of ends up that way. She and I spent a long time going through the work of Munch and Braque to see how each artist dealt with the cropped body in his paintings. What struck me the most was how classical Munch really was in his compositions.

“Separation” (“Løsrivelse”) from 1896 is among Edvard Munch’s works on display this summer at Oslo’s Munch Museum. PHOTO: Munch Museum

Take this image above by Munch called “Separation”. My mentor and I discussed how the man has been cropped around the knees while the woman is shown in full. This gives the viewer a sense of perspective – the man is closer to us than the woman. We also looked at the structure of this image on the whole. It’s a rectangular canvas with the two figures standing parallel to each other and to a tree. This gives three parallel forms to anchor the image. The woman’s hair floats behind her connecting to the male figure in an almost straight line. This creates a rectangle formed by the two figures. The woman’s dress gets enveloped by the shore curving from the bottom right toward the center and then spiraling back into her shoulder. The red plant at the man’s feet creates the counter balance for this shoreline making two diagonals within the rectangle of the figures. Visually it controls the viewers eye and keeps the viewer within this rectangle, feeling the tension of the forms who face opposite directions and are moving away from each other, yet simultaneously they are being pulled back and held together by the plant and the shoreline criss crossing between them.

My mentor pointed out how, as an artist, you must think with each figure about how it moves into or out of the space and why. So now I am looking at images in new ways. Why do artists or photographers crop the body in a certain way? Does it work? Why or why not?

Here are some images featuring cropped bodies that I thought were engaging. 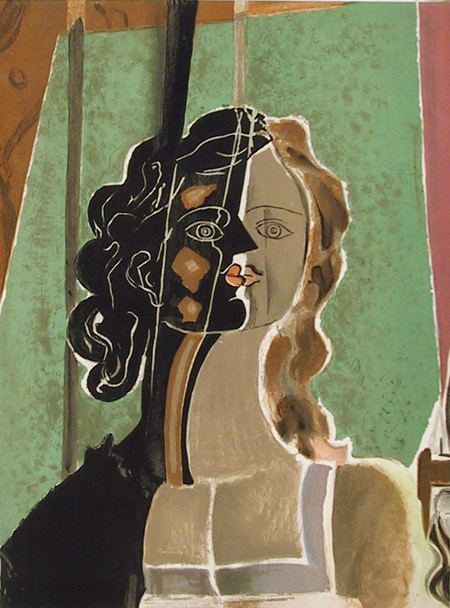 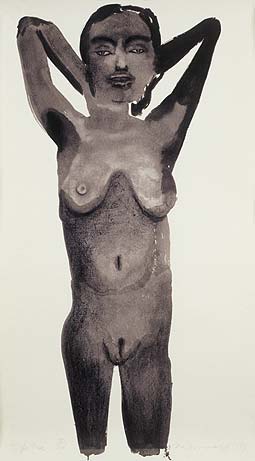 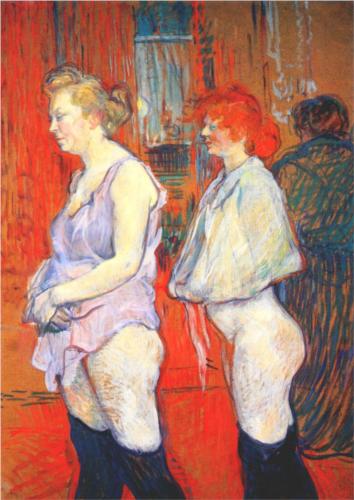 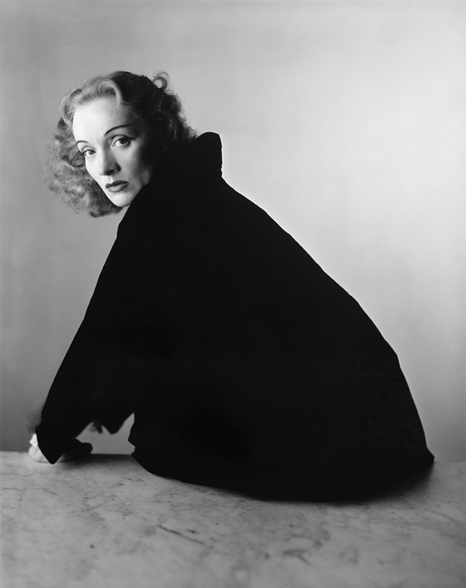 Admittedly it’s been a few weeks since I saw the show Matisse: In Search of True Painting at The Met. It’s been on my mind since I saw it and I definitely want to go back before it closes in March. I thought it was well put together, especially in the way you were able to see into the thought progressions between his paintings (that was the point, I know). I loved seeing how one painting was zoomed in from the first and another had a slightly different focal point from the one before. It showed how intent he was on searching for the different ways to convey what he saw. I wondered how he concluded that a painting was finished – probably one of the hardest things to know as an artist. It’s something I often struggle with, and I can’t help but think of this piece wisdom I got from my aunt about relationships that I think relates to paintings as well: the hardest part about relationships is knowing when to get out of them. When is a painting finished? How do you know when to put down the brush? When is it better to start a fresh canvas rather than play out the problem on the first? These are questions I imagine most artists ask themselves, as we’ve all heard the “it’s been overworked” critique (or is that just me?). As it says in the press release: “For Matisse, the process of creation was not simply a means to an end but a dimension of his art that was as important as the finished canvas.” Matisse decided in the 1930s to let the viewer have a glimpse of that painstaking process by having photographs taken at different stages of the work. 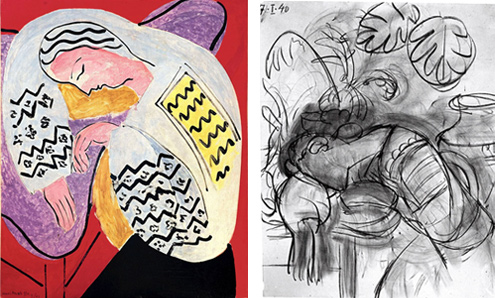 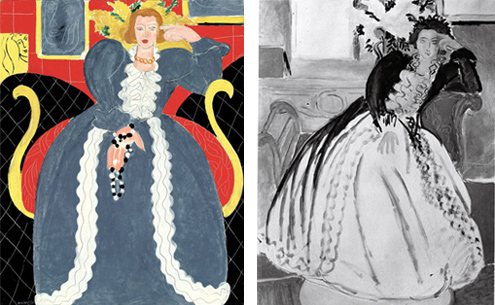 This was my favorite part of the show (gallery seven), not because the paintings were necessarily my favorite, but  because I loved the process. You had to play the guessing game of why he moved the bowl from the bottom to the side, and then conclude whether the final version really was the best version. Each painting was surrounded by several photographs, so it wasn’t just a preliminary sketch with the final product. Matisse fully intended for the public to be aware of these photographs as this gallery was a re-creation of an exhibit he did in 1945 at Galerie Maeght. What struck me the most was how well these paintings worked in black and white. He had reds and blues and oranges all next to each other, yet their tones translated perfectly to b/w. This told me so much about how great he was at color, not that I had any doubts. His colors not only work together, but they are from different tonal families that work in harmony as well. It had been a long time since I had thought about seeing my work through a black and white lens, so this inspired me to go home and snap some cell phone pics (it’s so easy now with apps that have b/w filters). Needless to say, my tones need some work!

I almost forgot! After seeing the show, my friend and I splurged for High Tea. It was fabulous, as you can see in my Instagram pic!