To ensure that I keep up with this blog more I’ve decided to create a weekly column where I list 5 artists or individual works that inspired me that week. It’s part of my resolution while living in Brooklyn to go out see more art.  That’s the best part about living in this city – direct access to amazing gallery and museum shows.  Yesterday I pounded the pavement of Chelsea, and while we were there for over 4 hours, we hardly scratched the surface.  Overall the shows were impressive and I came away invigorated by what I had seen.

Here are my top five:

Manuel Ocampo: The View Through the Bull of a Manual Laborer of menagerie Gussied Over White Ground: 20 Years of Self-Loathing and Intestinal Mishaps at Tyler Rollins. Sadly (for anyone reading this) the show closes tomorrow, so hurry up and get to Chelsea! It’s an exhibit that shows Ocampo’s total shift from the art that he became famous for in the 80s and 90s.  These paintings had thick applications of paint and were hung together almost in a Salon style. 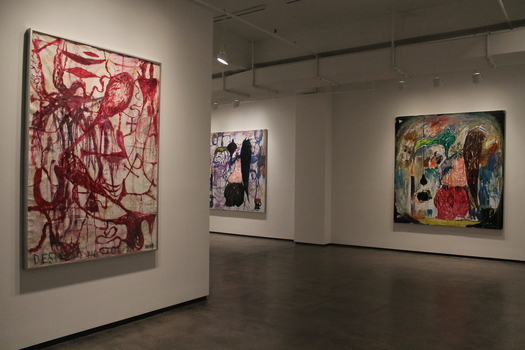 VIEW OF THE INSTALLATION AT TYLER ROLLINS FINE ART 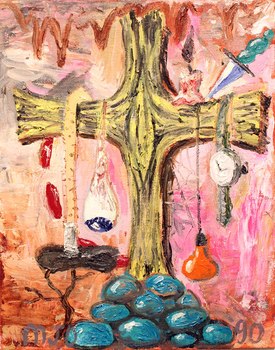 This is taken from the press release: “Ocampo’s current exhibition at Tyler Rollins Fine Art has as its dominant motif the figure of a buzzard, which acts as a stand-in for the artist, a cultural scavenger. Perched atop a skull, holding a light bulb in its beak, and flanked by a lighted candle and foaming beer stein, the buzzard parodies traditional artistic conventions of the still life and memento mori as well as the tropes of artistic inspiration.”  He seems to not only critique pop culture and religion, but the art world itself.

Tal presents a group of carnivalesque-like canvases, patterned with psychedelic stripes and sometimes inhabited by a character named Shlomo (Short for Solomon, Shlomo is also Tal’s middle name). Shlomo is both formalist prop and narrative force; his presence lends a sense of ennui to otherwise vivid compositions. 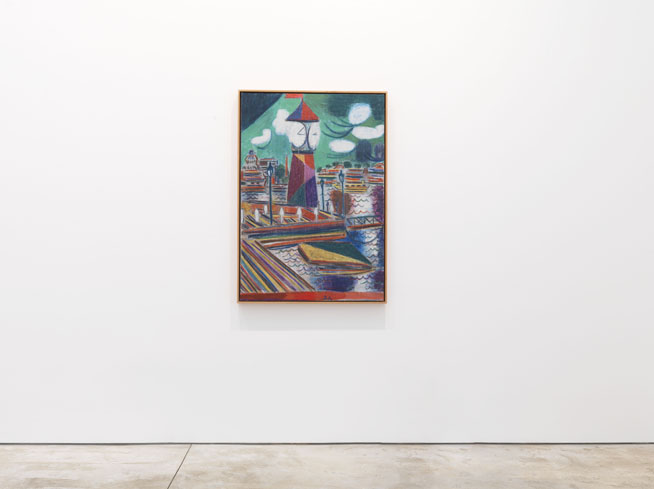 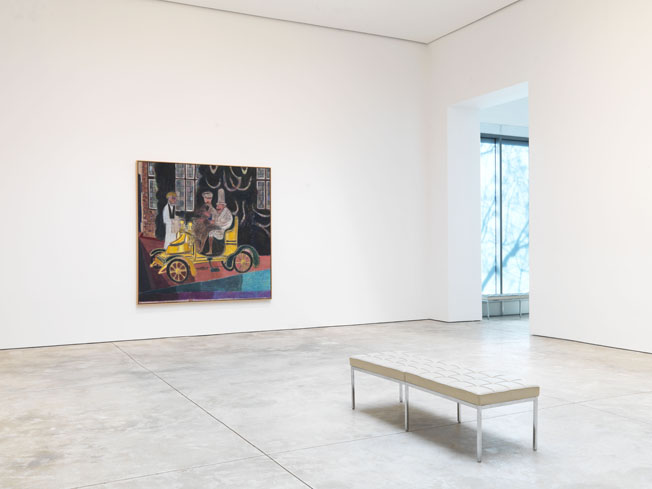 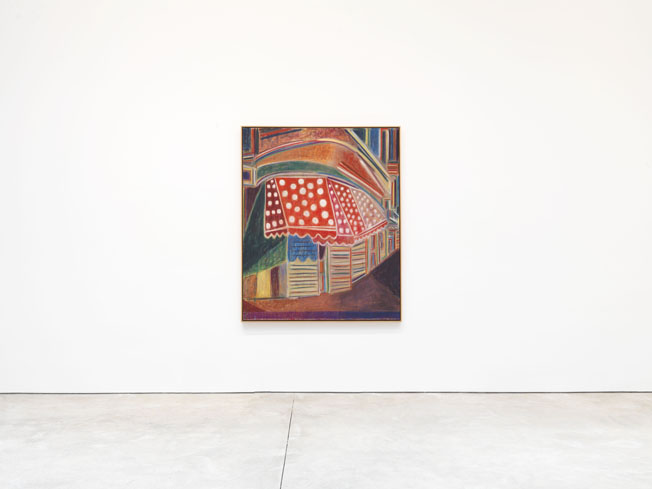 (images are installation views taken from Cheim and Read website)

For the works included in this exhibition, Dunham replaces the rosy female figure present in his earlier series with a stark, white, nude. Depicting the classic art-historical motif of the bather made famous by artists from Cézanne to Bonnard, Dunham inverts the familiar scene of the demure woman, replacing her with a vibrant and animated figure caught in bold poses – arms extended, hair splayed across her face. Pushing color, form, and line to create collision-like interactions between compositional elements of the painting, Dunham creates a compact tension between the interlocking forms to explore the relationship between subject and landscape, foreground and background. 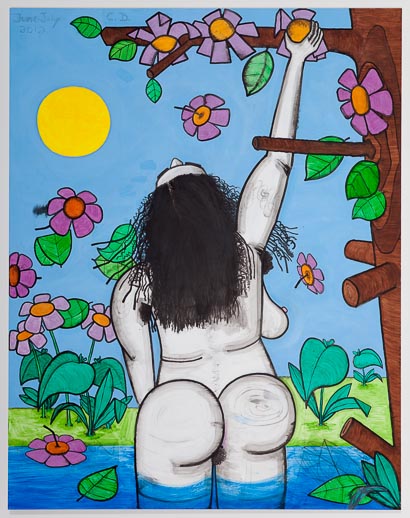 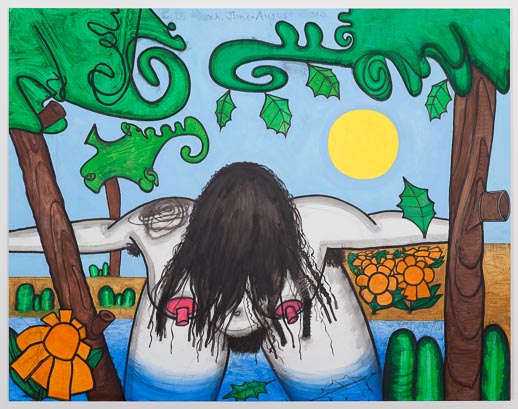 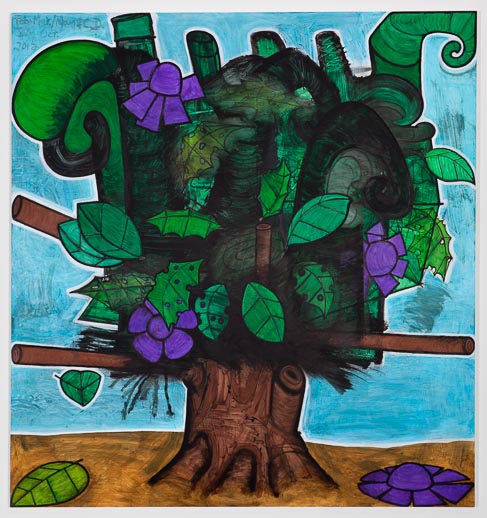 Barnaby Furnas: If Wishes Were Fishes… at Marianne Boesky Gallery until Jan 9, 2013.

In this new series of paintings, loosely titled “If Wishes Were Fishes,” Furnas again tackles epic historic and religious iconography, this time drawing from both the lore of Melville’s Moby Dick, as well as Jonah’s flight from God that lands him in the belly of the whale. On this Furnas says, “What interested me about whaling in the first place was that they (the whales) gave us light – their fat allowed us to bring God’s light into the darkness of the night so we could see our fingers and maybe read after the sun went down.”\

The paintings are haunting and I was struck with awe when walking into the gallery. The colors are vibrant and the space is broken up by sharp lines and splatters of red indicating violence. The style reminded me of futurist painting, but were more lyrical and narrative. 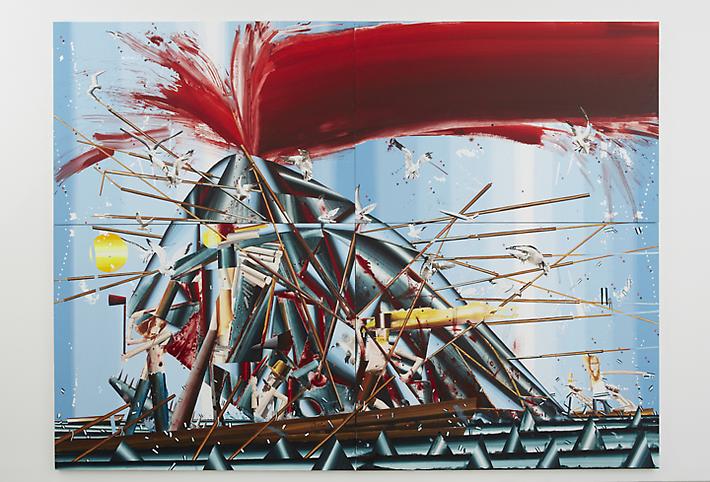 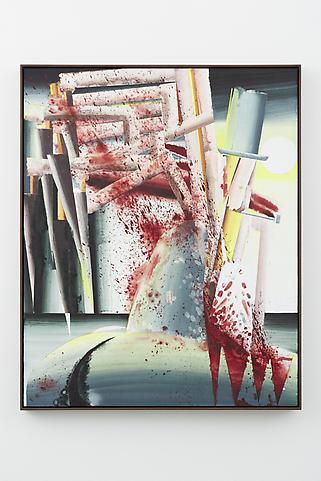 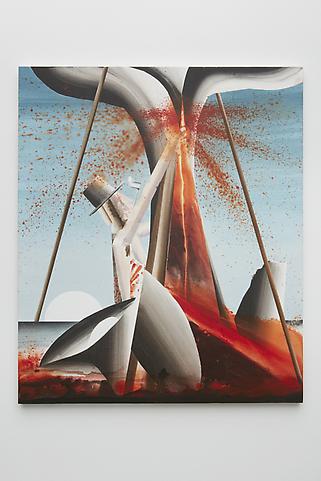 Mickalene Thomas: How to Organize a Room Around a Striking Piece of Art at Lehmann Maupin until January 5, 2013 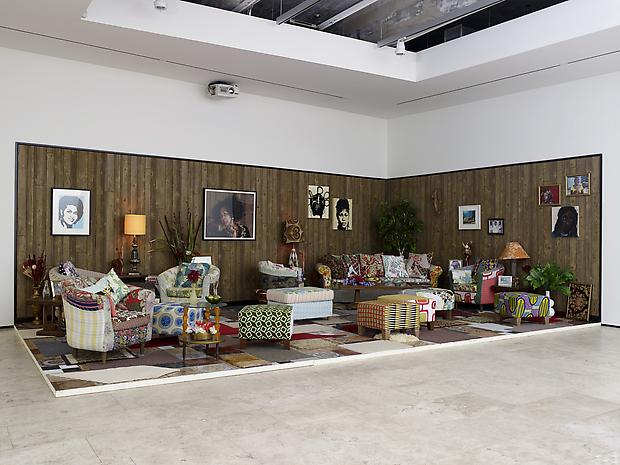 I recently saw her show Origin of the Universe at the Brooklyn Museum and that is a must see. This extension of the show at the 26th St location showed beautiful color photographs of the Aritst’s mother , Sandra Bush, along with the documentary “Happy Birthday to a Beautiful Woman” also about her mother. The documentary is beautiful and emotional and shows Bush reflecting on her life. Viewers sit in one of Thomas’ environments to watch the film.  The Documentary is also playing at the Brooklyn Museum. It’s a film I could watch again and again. 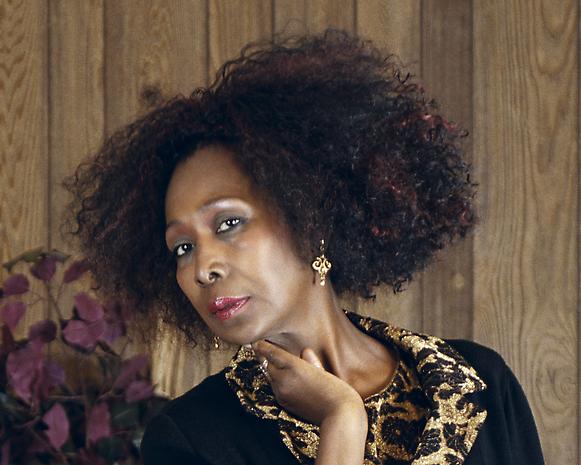 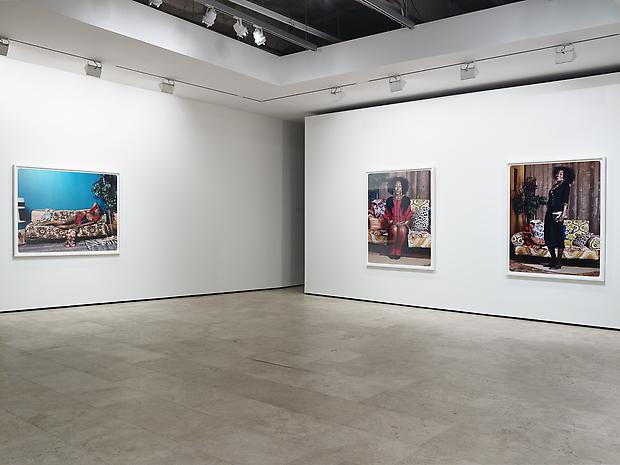